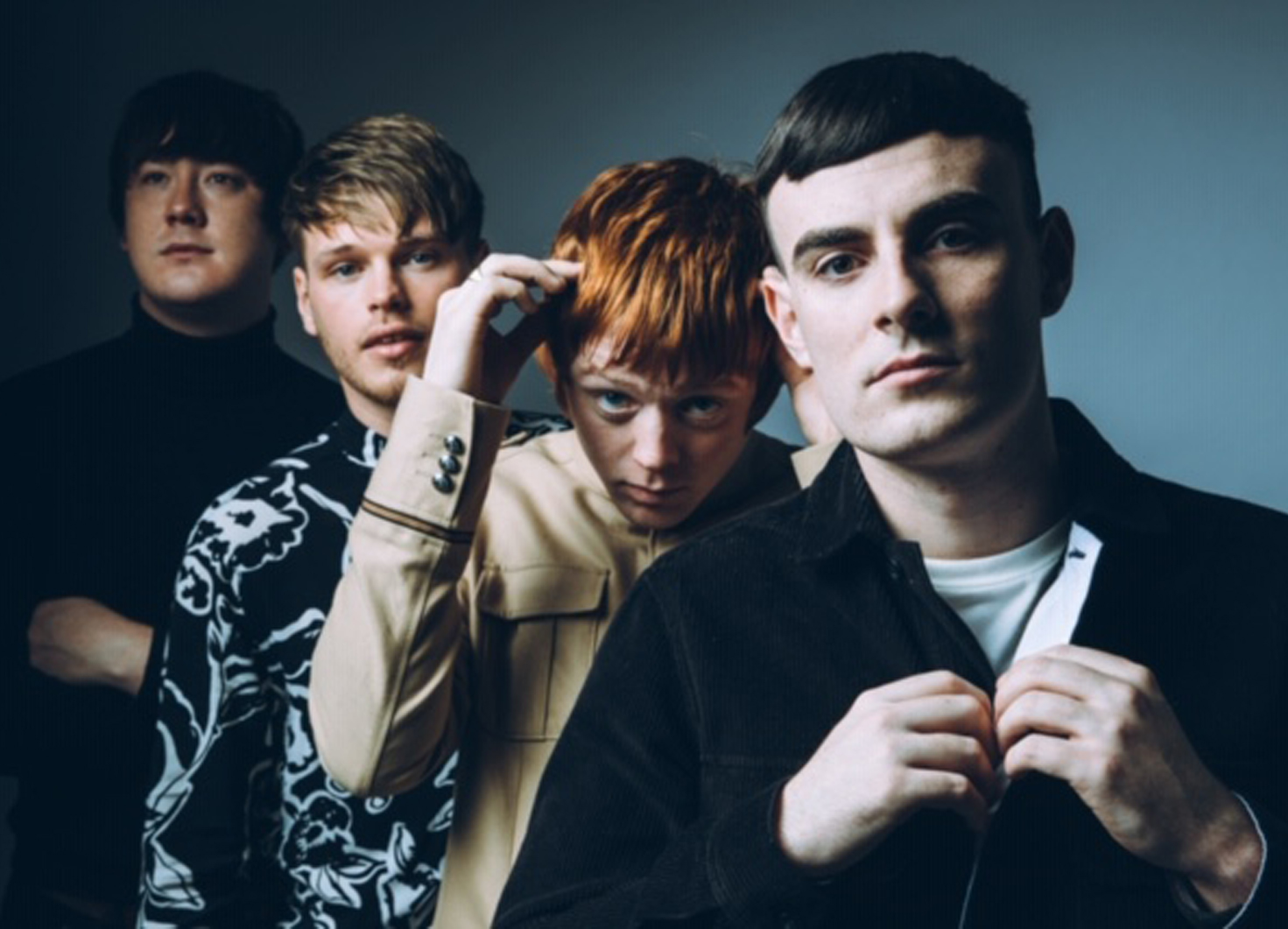 “The world needs us, it just doesn’t know it yet. We’ve got to the stage where we’re a sleeping giant. It’s ready to explode – everyone knows it’s going to happen, it’s just a question of when.” Ryan Breslin, The K’s

Welcome to the world of The K’s. If you’re familiar with one of the biggest underground success stories in rock & roll, make yourself at home. If you haven’t encountered their impassioned bangers, catch up: these four young men are a word-of-mouth phenomenon that’s rapidly becoming too huge to ignore.

The K’s have sold out the 1,500-capacity Manchester Ritz and will headline the 2,300-capacity Academy in the city on their next tour. They’ve caused the tent to be closed at Kendal Calling, with hundreds locked out trying to join the 2,000 fans within. Their streams are comfortably in the millions. Not bad for a band who’ve only released four songs on streaming and have swerved the attentions of the mainstream music press.

On the surface, the appeal of The K’s seems simple: embodying the relatable frustrations of everyday Britain and its zero hours economy, yearning for a better life in escapist anthems like epic next single Landmines and breakthrough tune Glass Towns. But if creating timeless thrills really was so simple, other bands would rack up so many streams and routinely sell out tours, thanks to the frenzied fan community the band has nurtured.

Their gigs are a guaranteed riot, but that shouldn’t overlook the sophistication that gives The K’s the immediately identifiable blueprint all special bands soon develop. Debut single Sarajevo is one of the few rock & roll songs to namecheck Austro-Hungary, notching up over 1.5 million streams in the process.

As singer/guitarist Jamie Boyle puts it: “We’ve crafted our own sound. Even if I’m not singing, you’ll know it’s a K’s song. We want to leave a legacy, to be more than just a band. I’ve seen it with my dad’s love of The Jam, where it becomes a lifestyle for people. We want to be so much more than just listening to the music – it’s developing so that everyone is united, in a room with a thousand other people who share a common interest, all having a mint time. That’s what The K’s are about.”

Jamie and bassist Dexter Baker have been friends since school in Earlestown, the Merseyside suburb halfway between Liverpool and Manchester. (“I still don’t know if I’ve got the best or worst of both worlds growing up in between them,” notes Jamie.) Jamie’s dad taught him guitar when he was 14 “and I’ve played every single day since, without fail.” Dexter and Jamie’s friendship shows in their on-stage chemistry, neatly summarised by the singer: “Not only is Dexter a class player, he brings the laughs.”

The K’s began in earnest when Jamie met Ryan Breslin, who’d already shared stages with huge bands including The Who, The Killers and Aerosmith as a session guitarist in his older brother’s band Slydigs. Although Ryan was living the dream of “enjoying one big piss-up while playing arenas and the biggest stages around the world”, he wanted to seek out his own creative outlet. The missing piece was Jordan Holden, a dream drummer equal parts John Bonham powerhouse and Reni fluidity. “Jord smashed it at the audition, nailing four tracks we’d only played once to him,” recalls Ryan.

The K’s have worked at jobs from strawberry picking to warehouse nightshifts to help fund their dream. Jamie recalls: “I’ve been a labourer. I’d lug blocks around all day, then play to thousands of people at Neighbourhood Weekender, thinking ‘How do you make this work in the modern-day music scene?’ I think all bands should have to do it, though. You can tell if a band is pushed straight into it, because their tunes don’t reflect normal life.” The ridiculously catchy Landmines was inspired by teenage life in Earlestown, as Jamie remembers “Having to wait around outside an off-licence until someone would buy your beer, then going to get wasted over the park, trying not to get twatted by the older lads while you’re doing it.” Ryan adds: “Landmines relates to so many kids’ lives. Well, it does around here, anyway.”

The songs’ rich lyricism of everyday life continue the tradition of Ray Davies, Paul Weller, Squeeze, Oasis and The Libertines, though the sharp Sarajevo was inspired by a book on World War I Jamie read “when I was bored, as a free book on my mum’s iPad.” Initially, the singer would take the skeleton of a song in for the band to develop, but The K’s is increasingly a songwriting democracy, with Dexter’s loves from Talking Heads to Quincy Jones and Jordan’s art-rock tastes coming into play.

The shimmering Aurora incorporates about 20 ideas and develops them into one huge anthem, while Ryan’s gigantic ballad Over My Head was an instant smash when it was boldly debuted at Manchester Ritz. “It’s great that we can strip it back and still kill it,” enthuses Jamie. He admits his music taste “is often about how good the frontman is”, while Ryan is the band’s classic rock & roll addict, a Keith Richards devotee also into Chuck Berry. It shows in their offstage personalities too, with the laidback and laconic Ryan a foil to Jamie’s excitable enthusiasm.

Landmines will be produced by Chris Taylor, the in-house producer at Liverpool’s famed Parr Street Studio, who has worked with Blossoms, Miles Kane and The Coral as well as overseeing fellow new talent including Red Rum Club, The Lathums and Jamie Webster. “We work best when the atmosphere is relaxed,” Ryan explains. “We’re open to ‘Why not try this?’, of course, but if anyone tries to order us into something, they get told to do one, every time. Being forced into something is when you hit a brick wall.” Jamie admits: “Before, we hadn’t been 100% happy with what we’ve done in the studio. It was trial and error, and we’ve had chance to develop in the studio too.”

The apostrophe in their name the only dubious aspect of such a phenomenal band. Initially named The Kaleidoscopes after their local record shop, they quickly shortened it to The Ks, adding the apostrophe as there’s another The Ks on Spotify. “Some people hate the name, but loads of people love how basic and to the point it is, based around one letter.” Ryan adds: “Some great bands like Foo Fighters and Arctic Monkeys have terrible names. You quickly associate the name with the songs, not the words.”

For the thousands of fans already immersed in the legacy The K’s are building, the band have quickly become more than the name or even the songs. The K’s already know they’ll have to leave some fan favourite songs off their debut album. “All the fans are asking ‘When’s the album, when’s the album?’,” laughs Jamie. “You can’t be a classic band without a classic album, and we’re confident enough not to rush ours. We won’t release an album until it’s right. And the way we’re writing songs that keep getting better, there’s no way we’re not going to have a second album ready to record by the time we’ve finished our first.”

It’s clear The K’s are going to keep growing, a cult sensation ready to blossom in the mainstream. It’s an irresistible, irrefutable spirit, welcoming to anyone who wants to escape into a better, more hopeful world. Come on in, just watch out for the landmines.