History of The Leadmill

The Leadmill is Sheffield’s longest running live music venue and nightclub.  It first opened its doors in 1980 and has been a creative hub in Sheffield for over 40 years.  It has been voted as Sheffield’s best live music venue on numerous occasions and has also won national awards including from the NME and Live UK. Home to live music, club events, theatre, comedy & film screenings.

We’re currently running 100 live gigs, 150 club nights, 50 comedy events and 50 other exciting events such as cinema screenings, quizzes and talks every year, including events in other venues and cities.

The Leadmill is now firmly established as Sheffield’s premier live music venue and as one of the most renowned venues on the live music scene.  Franz Ferdinand once told the Arcade Fire that playing the Leadmill was seen as a “rite of passage” and seasoned acts still recall the time they played the venue and opt to play here when they could be filling much larger venues instead.

If you have any photos, videos or special memories from any of our shows over the years then please send them to us at information@leadmill.co.uk.

Arts at The Leadmill

History of art at The Leadmill:
The Leadmill opened its doors in 1980 as a response to the lack of cultural facilities in Sheffield and was set against the backdrop of a political and economic environment characterised by the beginning of ‘Thatcherism’.
As the steelworks closed their doors Sheffield saw a radical decline of youth unemployment and slogans such as ‘no future no hope’ were banded around. This unlikely spark fuelled the fire to convert a derelict flourmill in a rundown part of Sheffield. Part of the building housed the legendary Esquire Club where during the sixties The Who, Jimi Hendrix, The Small Faces and others played on a stage made from two grand pianos with their legs sawn off. Then when a mixture of volunteers, students, artists and unemployed combined forces with a vision of setting up a centre for arts and music for others like them, The Leadmill was formed. These core values have been held within The Leadmills DNA for the past 42 years and will continue to throughout its career. 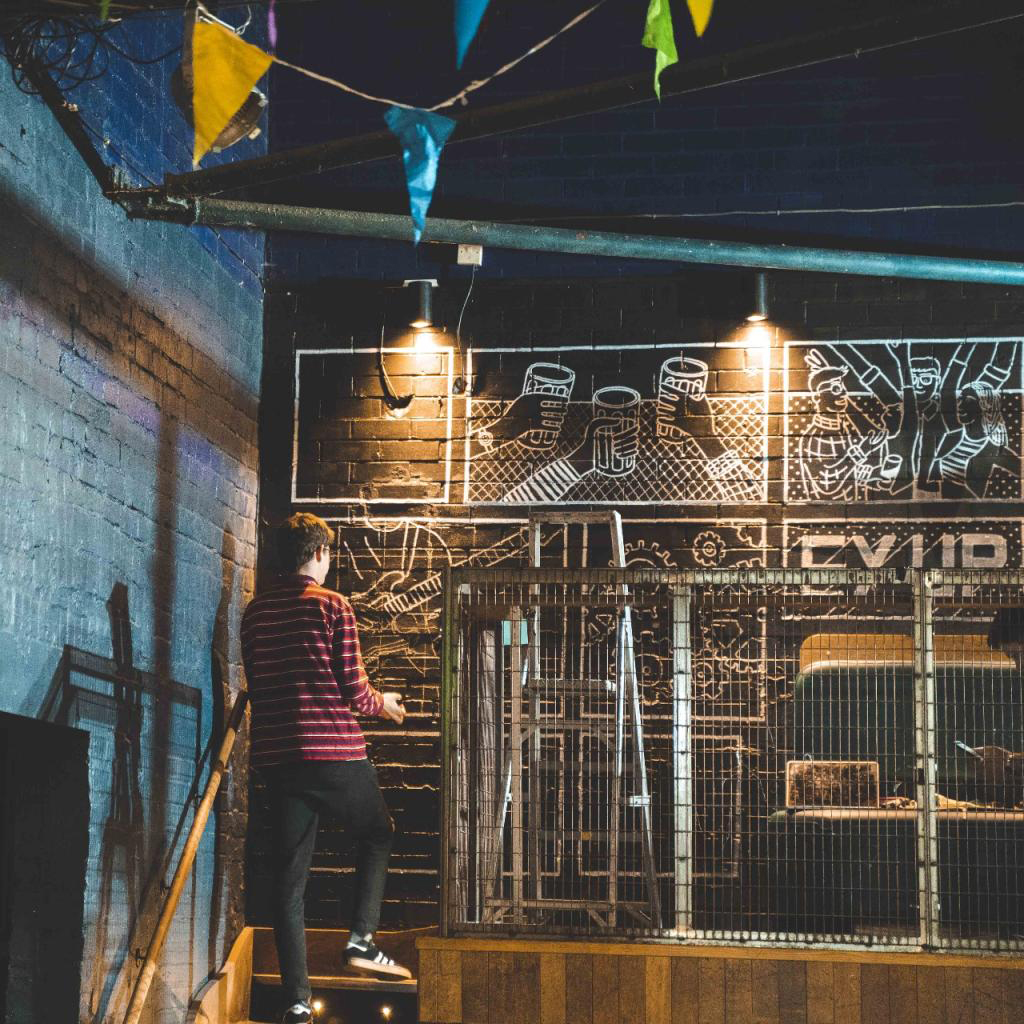 Will Rea
Will is the latest artist to join our Leadmill artist listings. His mural sits on the mezzanine level overlooking the dancefloor. Each panel of his work encapsulates something different about The Leadmill spirit and our place in Sheffield. His work nods to our live music, comedy, and club nights, as well as our heritage as a venue about to celebrate its 40th birthday! His other work includes explores buildings, technology, and sign writing, with an overall emphasis on Sheffield’s Cultural scene. You can see more of his work here: www.willustration.co.uk and on instagram here. 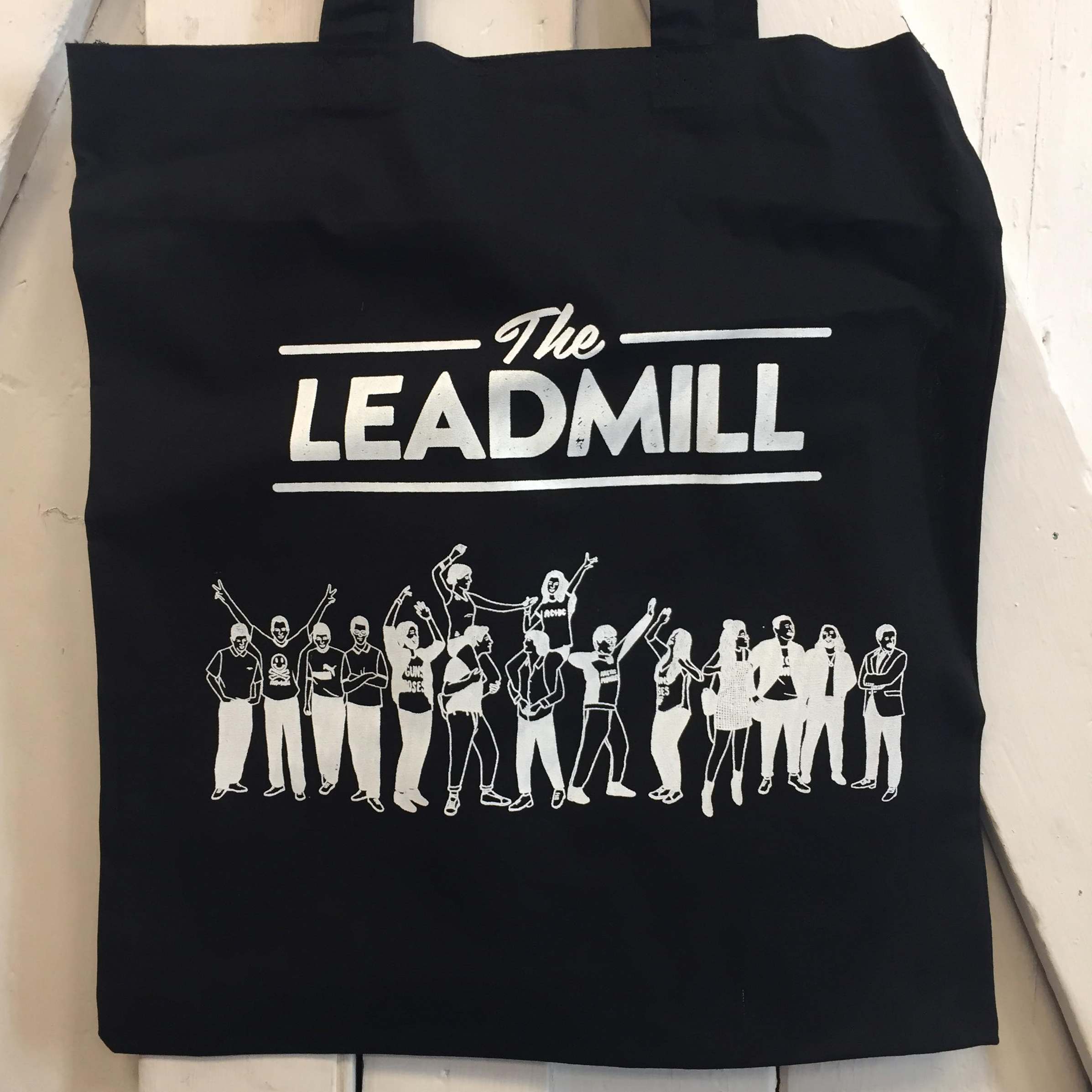 Molly Jones
We commissioned Molly to illustrate our Leadmill tote bags in September 2018. We wanted a design that encapsulates the fun and vibrancy that our customers bring to The Leadmill. Her line work illustration shows the Leadmill with a queue of people dancing their way into the venue. Molly’s other work includes sign writing and painting murals around Sheffield alongside commercial illustration and working on her clothing brand Nuditee. You can see more of her work here www.illustrationsbymolly.com 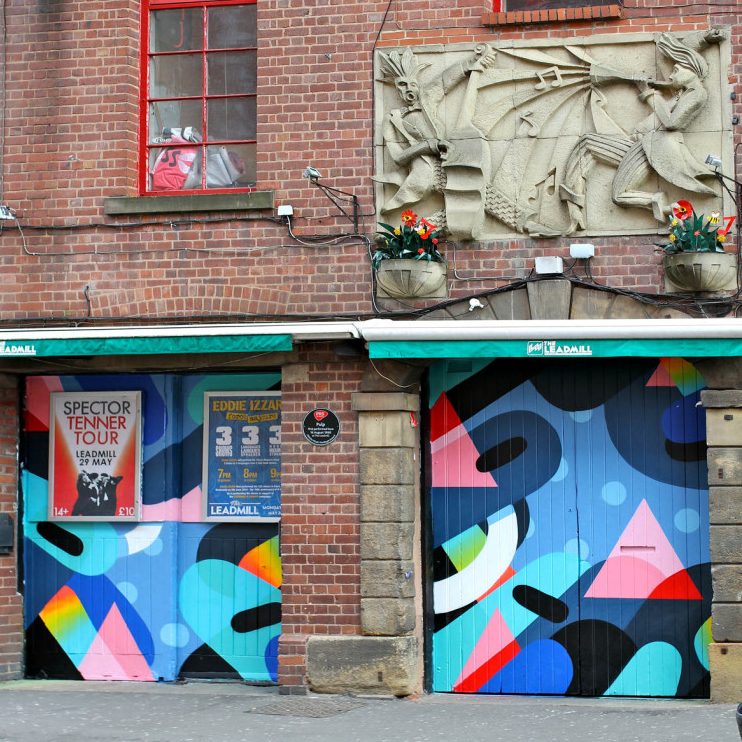 Florence Blanchard
In May 2016 to celebrate The Leadmill’s 36th birthday we invited artist Florence Blanchard to paint a new mural for the year on the iconic venue doors. Her iconic style of bright biological-inspired shapes and patterns sits perfectly across our two barn doors.  Keep an eye on our website to see who paints the doors next… https://florenceblanchard.com/ Kid Acne
In September 2015 Kid Acne came to The Leadmill to create artwork for the entrance way into The Leadmill. His work encapsulates the numerous artists and musicians that have played The Leadmill stage in the past 35 years. It also includes lyrics from songs that customers love to hear on nights out at The Leadmill, which were submitted to us via Twitter. http://www.kidacne.com/blog/ Pete Fowler
As part of The Leadmill’s 35th Birthday in May 2015 Pete Fowler was invited to create a mural on the venues iconic large entrance doors. Pete is best known for his work with Super Furry Animals and used his postmodern cartoon style to create characters to represent the vast variety of customers who come through The Leadmill’s doors. http://petefowler.tumblr.com/

Geo Law
As part of a collaboration with Red Bull we invited Geo Law to create a live art piece during a Red Bull Curates event held in the summer of 2011. The piece was in Geo’s signature style, including records and speakers to give a music theme to the artwork. The large scale piece was created in just a day in front of customers at the Red Bull Curates event and was on display in the main area of The Leadmill until 2016. http://www.getaloadageo.co.uk/ Henry Tietzsch-Tyler
Henry was one of the first artists to move into The Leadmill’s studio when they opened in 1980 and has kept his studio ever since. He has had exhibitions across the UK, Berlin, Lithuania and Hamburg and won numerous awards for his work. http://henrytietzsch-tyler.co.uk/ Chloe Thomas
In 2012 we announced that we would be running a competition for a local arts student to have the opportunity to create a mural inside The Leadmill. We had numerous submissions of ideas and our favourite was Chloe’s who created an impressive design which encapsulated Sheffield and The Leadmill’s musical history. Chloe went on to study Graphic Design at Nottingham Trent University and her mural was on display in The Leadmill’s bar area until September 2019.