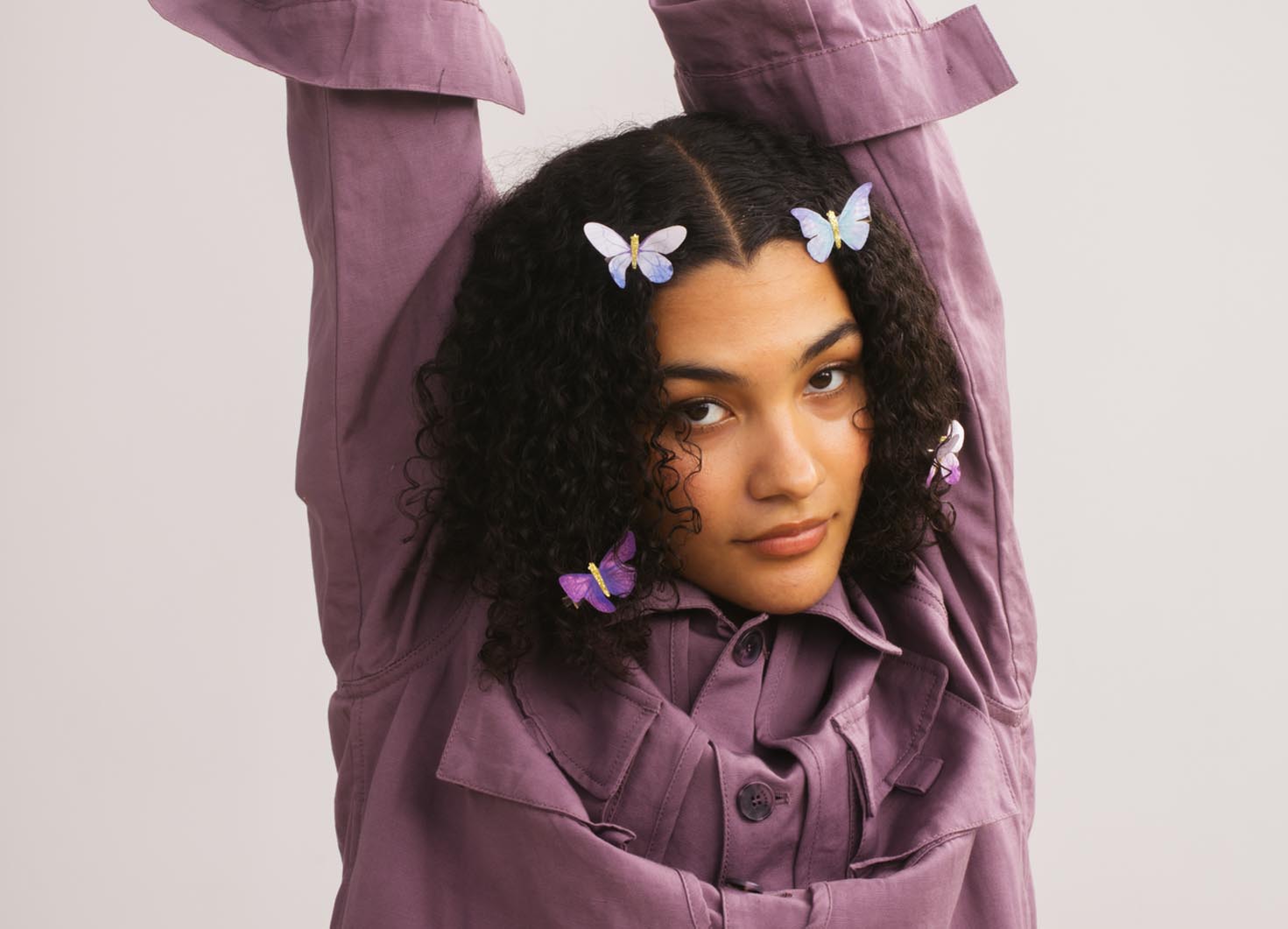 We’re delighted to be joined by East London RnB sensation Olivia Dean this August for a special show as part of the Music Venue Trust & National Lottery’s #ReviveLive campaign.

In the hopes that we can bring mates together again for a night of incredible live music, you can buy a ticket to this show and bring a friend along for free!

The free ticket holder just needs to demonstrate they’re a National Lottery player by showing either a physical or digital lottery ticket at the door. This can be a weekly draw ticket or a scratch card, and they must be over 18 years old to purchase and hold a National Lottery product. The name in which the show ticket is booked does not need to present a lottery ticket, and can adhere to the age restrictions of the venue (in our case 14+).

In the grips of a worldwide pandemic, it’s important to find your own sunshine. Whether that’s
adopting new self-care hobbies or getting creative with working from home, we’re all growing
and adapting, finding new ways to keep positivity alive.

For Olivia Dean, a summer without live music wasn’t an option. Making good on the
community spirit of early lockdown and her empowered, do-it-yourself upbringing, the rising
East London star teamed up with Clarks to present The ‘From Me To You’ Tour – a
self-contained, open-fronted yellow truck that allowed her to share her soulful voice with fans
right across the coast.

“This was meant to be my first summer of playing festivals, and I just didn’t want to accept that
it wasn’t going to happen,” she explains. “I spent the first three months of lockdown alone and it
was hard. I threw myself into being creative; what could I do that would make me happy, but
hopefully make others happy too?”

A self-confessed social-media-phobe (“If I didn’t do music, I’d definitely have a little brick
phone”), the usual route of live streams and virtual concerts didn’t appeal. “I’ve always found
Instagram quite anxiety-inducing – when everything moved to livestreams, it just pushed me to
do something different. I love riding my bike, so I said to my manager ‘what if I offer to my
Instagram followers that I pop round on the bike and sing them a song?’ She was like yeah, you
could, but what if we’ve got a van? We were both half-joking, but it snowballed from there –
painting it bright yellow, all 60-70s sunshine and flower power, the band playing…suddenly, it
didn’t seem like such a weird idea…”

In fact, the truck tour was anything but weird – it was a way for Dean to maintain the
momentum she has been building ever since her poignant debut single, ‘Reason To Stay’ caught
the eye of London Label AMF (Loyle Carner, Marika Hackman). Since, she’s amassed over 8
million streams on Spotify alone. An emotional and confessional songwriter, her journey to
music started at a very young age, the result of parents who encouraged her natural talents
before she even recognised them herself.

“I started singing when I was eight – I was quite shy as a child, but my mum suggested I do
Musical Theatre on the weekends as a confidence booster. I just fell in love with music from
there. My dad has a very eclectic music taste, and we would listen to records all the time together
– Al Green, Steely Dan, Aretha Franklin, Carole King. From there I found Amy Winehouse; I was
fascinated by the way she tells a story, and her old-school view of love where it’s like, all or
nothing. I got a guitar and then a second-hand piano for my sixteenth birthday, but at school, I
definitely felt like the odd one out, that kid who just wants to perform and sing in all the
assemblies. I realised I needed a change of scene, and my Mum was like, ‘what about the Brit
school?’ ”

Though she didn’t think much of her chances, that Brit application ended up changing Olivia’s
life. Travelling nearly two hours there and back each day, she studied for four years, meeting
friends who would go on to be her current bandmates. At her final college performance, she also
met her-now manager – a woman who was so impressed by Dean’s voice that she invited her to
audition for another client – Rudimental.
“I went straight from college to touring with them,” Olivia beams. “I was in New York for the
Jimmy Fallon show, festivals all over…and I was so young! I’m 21 now, and all that was three
years ago? It’s just mental. Obviously, it was an amazing opportunity, but I didn’t want to be a
backing singer forever. I think I probably get it from my mum – I just knew what I wanted to do
and the kind of music I wanted to make. She’s always instilled that in me – you can do absolutely
anything you put your mind to.”

It’s no surprise to hear that Olivia’s mum, Christine Dean, is an inspiration force – as head of the
Women’s Equality Party, her leadership strength can be heard in Olivia’s songs, vulnerable and
gentle but always carrying a strong thread of female independence.
“Now I’ve just got out of this big relationship, I’ve really realised that you don’t need someone
else to complete you,’ she explains. “From the business side, there are some good men involved
too, but I’ve found working with other women to be the most empowering thing. All the video
directors that I’ve worked with so far have been female, and I’d like to keep it that way. I
wouldn’t say my music is for women only, but I feel that’s who I’m speaking to when I’m writing
it, without sounding too like ‘grrr, I hate men’…”

While previous tracks such as ‘Password Change’ captured the awkward struggles between her
and her fellow football-loving ex’s relationship struggles during the 2018 World Cup
(“something was going on between us, but we obviously couldn’t get into it there and then,
because y’know, England might win!”), her latest project feels notably timeless. Drawing on the
emotional pop songwriting that soundtracked her youth, ‘What Am I Going To Do On Sundays?’
wasn’t initially intended to be a break-up EP, but has ended up answering many of the questions
that Dean has been asking herself in this year of intense self-reflection.

“The title track is probably my most vulnerable thing so far – it’s very dramatic. I hadn’t actually
ended the relationship when I wrote it, but I think getting it out allowed me to take that step.
I’ve had to get over worrying about what the person I’m writing about might think – I think it’s
actually quite flattering having a song written about you! Being captured in time forever, I’d be
gassed! I guess it can be quite difficult to go out with a songwriter, but none of these songs are
mean – they just really capture this time in my life, a period of growing up and learning about
myself.”

The self-education of Olivia Dean doesn’t stop with her romantic relationships. Knowing her
worth and singing about it too, the soft jazz of new single ‘Echo’ could well be about a boy, but it
also applies to a host of situations in life where we look to those around us for emotional
reassurance and equitable support, particularly during tough times. Although not explicitly
linked, it’s a fitting soundtrack as Dean explores the relationship she has with herself and the
world, thrown into sharp relief under 2020’s heightened conversation surrounding Black Lives
Matter.

“To be honest, when George Floyd’s death happened, it was some of the worst few weeks of my
life,” she reflects. “It was so, so heavy, being in my flat by myself and trying to process it, but it’s
something I want to speak about because it’s part of who I am. Being mixed race and growing up
in East London, I’ve definitely struggled with my identity – I used to straighten my hair every
single day until about a year and a half ago because I genuinely didn’t think I could be pretty
without. How sad is that? Now, it’s so important for me that I keep my hair how it is. I want
people to see that. If I have young black or mixed-race fans, I just want to be like your hair is
cute, it’s not a problem! Being mixed-race can be confusing – at times it feels like the world is on
two sides and it’s difficult to know where you fit. But it’s a very present conversation that
everybody needs to be a part of, and with that on top of the virus, I’m just constantly trying to
bring as much positivity to the table as I can.”

Though ‘What Am I going to Do On Sundays?” may come from a difficult year, it’s a lasting
testament to Dean’s endearing storytelling, the heartfelt-yet-humble disclosure that is
guaranteed to make her a star. “There’s just been so many times where I’m just like ‘I’m blagging
this”, but I’m sort of over that now,’ she smiles. “I feel like I’ve aged three years in the last few
months! But I do feel like I know myself now, and that I’m cool to be on my own. I think that’s
such a beautiful place to be.” From her ingenious truck tour to her role-model potential, it seems
she is fast becoming an artist who knows exactly how to draw a silver lining from even the
darkest of clouds.